B L A N K A PHOTOGRAPHY 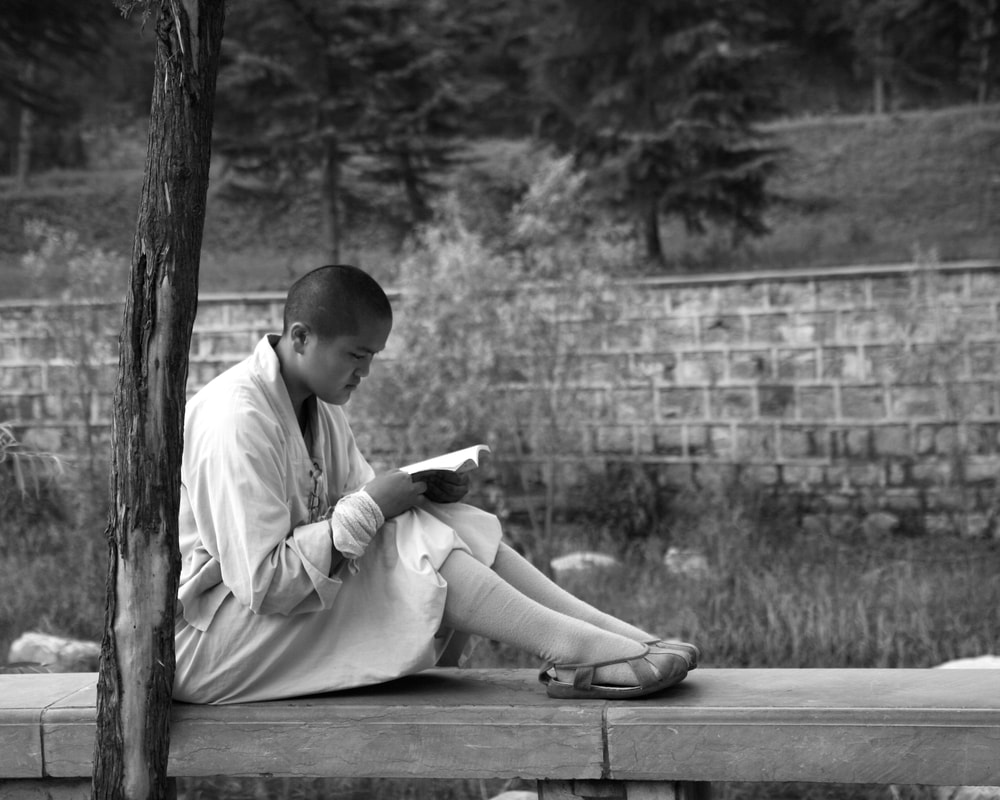 I started working on my personal project “Strong Mind” in the rural mountains of China, where I got invited by the Shaolin monks to the training grounds of the Shaolin Temple, stay for the summer 2008 and learn from them about life. All they wanted in return was to bring it back to the west. Since then I’ve been doing my best to fulfill the promise.

I trained with the monks, learned Meditation, Kung-fu, Tai Chi, Feng Shui and Mandarin language and their approach to everyday life. During my stay in Shaolin, I woke up just before 4am with the don to go for a run with the monks and children who studied to become monks themselves. The run was about an hour in a high altitude 3200 meters above sea level, followed by Tai Chi energy and breath work, then breakfast, daily hygiene, chores, rest, more meditations and training Kung-Fu, Mandarin class, acrobatics, dinner, meditation. All of that from to dawn to dusk.

My expedition to Shaolin Temple was in conjunction with the 2008 summer Olympic Games in Beijing
At the end of my stay, the monks tested what I learned: how strong my mental powers were. Through meditation, affirmations and mainly breathing, I was able to focus my inner strength, my chi energy on one spot of my body, my right tight, while, in a ritual, the monk broke a wooden stick over my leg. The stick didn’t break the first time so I took two hits within few seconds. The wood splinters got scattered across while I remained standing motionless and strong, focused and motionless. I passed the test.

Then, my journey to disseminate the monks message to the world began. The monks gave me 8 secret treasure breathing techniques and embodied in me how to trust in the power of my mind, making impossible possible as they displayed to me in various occasions when physical pain didn’t exist as they broke an arrow with a throught, or laid on the bed of nails or sharp machetes, lifted up on sharp spears- without spilling a drop of blood. Years later I too broke through my fears and broke an arrow with my throat as well as walked on fire. Mind over matter. Truly.

I published my first photography/poetry book Strong Mind, in 2014, featuring Shaolin monks and their philosophy. I am very grateful for this journey, however difficult and challenging it was at the time. The monks directly influenced the rest of my life.

Context for the project

Knife crime statistics are included in the UK government’s annual report on crime. January to June 2012 there were 29,513 recorded offences involving knives or other sharp instruments. However, the recorded number of knife offences was 9% lower than in the preceding year 2011. Since January 2010 the CSEW recently has interviewed children aged 10 to 15 about their experiences of crime in England and Wales. The study suggests a knife, screwdriver or stabbing instruments used in 11% of overall violent incidents involving a weapon against children. Instrument wielding juveniles (aged 10-17) were the offenders in 17% of cases. The custody rate was 10% for juveniles and 28% for adults.

These statistics are indicative of how many teenagers participate in knife crime on London’s streets, and the social issues which need to reconsideration as a society. Parents and guardians are not always aware of the warning signs, not able to take the difficult deception to seek professional help for their teens.
The first step in helping a troubled teen is to accept that there's a problem, and then to find the best mental health professional or therapeutic program to work with them in healing and making positive changes.

Matt Ahmet, from a charity organization Shaolin Temple Cheshunt, argues that teenagers who are able to get involved in physical and mental training will benefit from be calmer disposition and points, they are able to contribute foreseen, in ways and often unpredicted.

But what does it really take to make a difference in the young person’s life?
In my project named 'STRONG MIND’ I set out to show the way of different thinking for teenagers, be they troubled or not. Our mind could be used in the most positive ways.

In my book these teachings are done through kung-fu master Matthew Ahmet, 26 years old.
Matthew, who spent 7 years of his life in Shaolin Tepmple, China, personally visits schools in the UK and gives talks to teenagers. Shaolin Temple Cheshunt, which he founded, runs a programme, which fills children's and teenager’s free time with engaging activities and learning opportunities such as calligraphy, meditation or learning Mandarin language as well as discipline and hard physical training.

Not particularly a self-help book or story of hope and motivation, the book is targeting the audience of parents and teenagers. I'm hoping to help parents to see what difference it makes in their child’s/teenager’s life once they are involved in something they are passionate about. I also want to show a possible way for teenagers who are in the major decision-making part of their life.

Success of the project

I intended to produce a book with a sensitive yet impactful approach. I believe the story provides the audience with a moving account of dedication and focus as a glimpse to an everyday life of those in the kung-fu path. I edited the photographs to a very small amount of 15 photographs, each paired with poem I wrote especially for given photograph. It is a minimalistic approach and the content of the book stresses the importance of being organized, writing down goals and live life with a deeper meaning rather than just drifting along. It aims to be thought-provoking and raise an inner dialog in the readers mind.

There are many different locations chosen for the photo shoots as well as different times of the day. One locations for the shoots were bedrooms inside the private homes of the two main subjects in the book : 13 years old Wictor and his teacher Matthew.

Aims and objectives of the project

The words used throughout the book are texts I wrote specifically for each photograph and I aimed to create an individual body of work. The approach of the book’s design and text is minimalistic. I used no punctuation through the whole book and chose bold Trojan Pro typeface, all letters in one size. I chose simple square format and hard cover of the book with dominating shadows and shades of black and bright yellow, which compliments the STRONG MIND title of the book.
The production of the book, the printing and binding process is something not to be forgotten- it is very important and essential part of the whole work. Laminating black on the cover caused damage of the pigment and had to be reprinted and laminated again in a different way and also and rebounded. There were other factors causing many complications, but these were external. It is very important to chose the right printer and binder and ideally to have the whole book produced at the same place as there could be a lot of miscommunications between all parts involved.

Access was another limiting factor as the temple had its own busy  schedule and a strict regime. It took one month for the first shoot to take place. Every single session was planned and organized two months in advance with a lot of email conversations, proposals and specific suggestions and personal meetings without photo shooting at first. This strategy an invite proved worth it- only one shoot had to be rescheduled due to heavy rain and freezing cold for Oxford Street location.

The aim  of the book is to have the audience be able to see, understand and be inspired by ‘STRONG MIND’. The book’s objective is to reach teenagers and resonate with them- make them realize and revaluate their way of spending free time and have them hopefully motivated to become the better version of them selves, realizing the power of each individual to thrive to do the best- whatever it may be. Kung-fu, meditations and buddhism is a tool and example used in this book, but the same result could be achieved through dedication to anything meaningful for the specific given young person.

Relationship to past and present photographic work

During the research I had to take a deeper look at Diane Arbus and her work with teenagers. Particularly her psychological portrayal, which covered a great range of social groupings and individuals. Arbus is a practically canonized artist whose work is now acknowledged for its rough empathy. This approach is the exact opposite of mine and it was my aim and challenge to build a solid body of work which will not seem naive, yet will deliver respect  the subject deserves and do so with an understanding, sensitive approach.

Rania Matar, another great photographer who has been working with teenagers. Matar offered summer photography workshops to teenage girls in Lebanon's refugee camps with the assistance of non-governmental organizations. Matar's work focuses on girls and women. She documents her life through the lives of those around her, focusing on the personal and the mundane in an attempt to portray the universal within the personal. Her project A Girl and Her Room is similar to my approach used in ’STRONG MIND’.

South-African photographer Michelle Sank works with similar ideas. She is interested in the experience of growing up, the transition from childhood to adulthood. She is interested in how the media and popular culture influence the way that young people understand themselves and their place in a society.

“If we acknowledge that young people represent the future, where the future appears uncertain, society will often express feelings of ambivalence towards the young. What was once embraced by the society as the sense of freedom and independence of youth, is now perceived as a social problem. Much of our perception (or misconception) of young people is created and extrapolated through photographic media representations. Media representations of young people will often focus on negative features of youthful behaviour, where hanging out with friends is reinterpreted as antisocial behaviour and even teenage styles of dress take on a sinister and threatening aspect. Amidst so many confusing signals, the project asks the question how do young people see themselves, how are they represented and how do they possibly want to be seen?”